The technology for iOS which launched over 18 months ago and was purported to seamlessly link your home security, technology and heating, has gone cold.

Announced in June 2014 at WWDC (94 mins in), HomeKit was much heralded in the home technology market, with Apple’s keynote speaker Craig Federighi declaring it would “bring some rationality to this space”. Alas, this is yet to materialise, with Apple having little very impact in this market at all since. 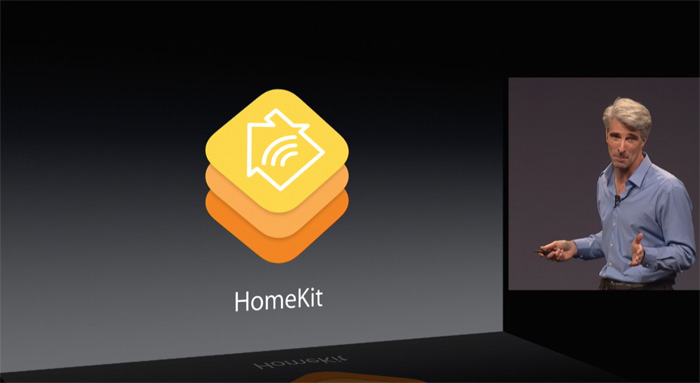 At the time of that keynote speech, the hopes were high. Federighi also claimed: “With Siri integration you can say something like ‘Get ready for bed!’ and be assured that your garage door is closed, your door is locked, the thermostat is lowered and your lights are dimmed. That’s HomeKit.”

It was a great vision, and still is – a centralised platform which controls all of your home’s technology, rather than individual apps for each different asset – but it’s fair to say at this point in time, there is virtually no-one (with the exception of this guy) regularly using this feature, probably not even Craig Federighi himself.

although HomeKit technology is available, it offers very little, if any, improvement from third party apps

Why? Well as it stands in 2016 there isn’t even an official Apple ‘HomeKit’ app to download, let alone one built into your iPhone or iPad. The list of HomeKit supported products is also embarrassingly short.

In truth, although HomeKit technology is available, it offers very little, if any, improvement from third party apps, aside from Siri integration. Controlling, say, your Hive heating system from your iPhone is no different from its Android counterpart – you just use Hive’s own app and go from there. HomeKit is virtually rendered useless.

The worrying side is that Apple have started to get bad form in these instances – while in an ideal world uniting a set of practices or apps using their ecosystem sounds great, it doesn’t always work well in reality. For a company so focussed on user experience and getting things right, there have been some major failures in this area over the years at Cupertino.

Take Passbook for example, an incredibly simple way of integrating all your purchasing into one app. Except with virtually no retailers on board since its launch way back in 2012, the feature (even after a revamp to include Apple Pay and a rebranding to ‘Wallet’) just hasn’t taken off.

More recently, Apple’s Health app is on its last legs before it has even got in its stride. Aside from providing incredibly boring graphs, charts and statistics about your average steps per day, most of the information is garnered from third party apps which display the same information much better themselves. Yes, the Health app can show the length of your runs alongside weight loss or heartbeat rate, but the Nike+ app, for example, has beautiful UI, detailed maps and much more, making it and others like it, far more appealing to most users.

So why specifically is HomeKit failing to take off? Most industry insiders point to one thing: security. Not your house security, but that of Apple’s systems and the company’s strict policies on how apps can interact with a user’s information on any given device, particularly when it comes to Bluetooth.

Of course, as an Apple user the notion of trying to unite several complicated things into one place makes perfect sense, but only if the end result is significantly better than the sum of its products. The net result is a chicken and egg situation. At the moment is there actually any incentive for companies to jump through the hoops of integrating with HomeKit if they already have their own working Android and iOS apps? Probably not.

It’s a strange scenario. On the one hand is feels like we’ve got one foot in the future – the notion of being able to control all the working parts of your house from one device is incredible. On the other hand, it feels like we are coming up short in achieving this, and are still some years off.

And of course, there’s that one important missing component: the killer feature. Even with a lacklustre product, one exclusive element can be enough to gain you market share and, in turn, a huge catalyst. HomeKit’s saving grace is more likely to come in product form, especially with a gaping hole in the home security market. Unfortunately, Apple has probably already missed its greatest foot on the ladder: Nest.

Has HomeKit missed the boat with Nest?

Formed by ex-Apple engineers in 2010, Nest has grown to become one of the market leaders in the home safety market in a very short space of time. With only three products, the company has carved out a great niche using the Apple ethos of making quality products with beautiful aesthetics and a focus on usability.

It seemed the perfect company for Apple to acquire or form a partnership with, especially given that it was founded by two former Apple engineers. But in January 2014, just as Apple was getting ready to announce HomeKit, the bombshell hit – Google had acquired Nest Labs for a staggering $3.2 billion in cash. Why pay so much for a fairly niche company? Many critics would argue it was simply to stop Apple from doing the same.

It’s certainly no coincidence that since then the home security market has stuttered. British Gas, who by all rights should be the market leader in the UK, delved into home security products a few years ago under their ‘Safe & Secure’ arm. Less than two years later the project was mothballed due to lack of uptake, and Cambridge-based company Alert Me, who had provided the security products such as sensors, alarms and cameras, were acquired to solely concentrate on producing smart meters instead.

The future for HomeKit

So is there any hope for HomeKit, when there doesn’t seem to be a valid market there yet? For all of Apple’s conjecture, there are really only two distinct uses for HomeKit – heating and security. The former is dominating by the heating equipment manufactures, who can tailor specificity to their own products far better than a generic platform such as Apple’s could. Even Nest’s thermostat is limited in what additional features it can provide, and this is an area where Apple look to have very little influence.

Home security, however, is a subdued market, but there’s no reason why the potential there couldn’t be tapped into. We all have very basic protection for our homes, and in most cases are using standard key locking methods that date back centuries. Enhancing this market is simple and varied – door locks, window sensors, smoke alarms, security cameras, smart sockets and motion detectors are all fairly straight-forward, but useful products  – but no-one has yet to come up with a sustainable business model, and indeed technological platform, to combine them all.

This could well be where HomeKit finds its niche. The problem once again though is the thrid-party suppliers. Apple has already lost a key player in the form of Yale, who in October 2015 announced a partnership with – yes you guessed it – Nest, combining their technology and security know-how to launch their first joint product – the Linus smartlock.

Forming partnerships is the only answer, but even that isn’t easy as home setups are region-specific.

So where does this leave HomeKit? Even as an Apple user, I’m hoping that the Nest/Yale partnership works for many years to come. They are a perfect fit and are capable of producing a range of products that will improve most homes.

That’s not to say there isn’t room for Apple in the market, but unfortunately expecting your brand name alone to entice external companies to produce products to work on your virtually non-existent system just doesn’t stack up.

Forming partnerships is the only answer, but even that isn’t easy as home setups are region-specific. In the UK, Honeywell seems an obvious target as a company that has heating controls in millions of home and is trying to branch out into the security market. Its product and customer base are in place, but is failing miserably with user-experience and technology, just where Apple could help.

The reluctance for change

For all our dreams of living in the future, it seems like we are still some years off yet. The heating and security systems we have in our homes have served us well for many years, and people are rightly reluctant to the unnecessary expense of change. Individually controlling your radiators from your phone sounds great, but is it worth replacing a whole heating system for? Almost certainly not. Similarly, is a £79 smoke alarm really going to enhance your life more than a standard £5 one? For most people, no.

We are headed in the right direction though. As previously mentioned, in Britain, the Government plans to fit smart meters to all homes by 2020, and nearly all new boilers are themselves integrated with smart technology. In an era of Wi-Fi kettles, our home living is gradually becoming more adept with technology, and that can only be a good thing.

Of course age too plays a part – at present there’s very little crossover between those of the population who are home owners and those who are of a generation who appreciates and understands the technology used in these products. As the years progress the catchment market will naturally increase.

So unfortunately for the moment it’s just a case of ‘wait and see’ for HomeKit; it could well be another iOS idea that just fizzles out, or it might find the partnership that brings it back to life. If Apple could unite such a variety of markets and products into one universal system it would be incredibly beneficial, particularly with Siri and Apple TV integration, but the reality of that situation is a lot further off than the concept.