Having waited years for a native Mac app, thousands of CrashPlan Home users have finally jumped ship, forced out by software company Code42.

It’s fair to say that us CrashPlan Home users have had it rough. Way back in 2014, I switched from my then backup service of choice Mozy, to CrashPlan by Code42. At the time I gave CrashPlan a glowing review, save for one issue – the lack of a native Mac app – something that was promised would be shortly arriving.

@richpaul We have big things planned for the next version of the app….

By 2016 a native CrashPlan Mac application had finally arrived, but, strangely, only for business users. What a kick in the teeth. Still the future looked promising; a full roll-out for all customers would surely follow?

In fact, the opposite happened. In August 2017, CrashPlan abruptly killed its Home subscription service. It’s fair to say the reaction wasn’t great.

And that’s why brand loyalty sucks. Looking back through this Twitter thread, the replies over the years are ridiculous. As a final insult, CrashPlan offered no decent upgrade discount on its Small Business tariff, and multiple computers and friends and family backups – previously included within your package – would now cost an individual subscription each time.

Although Code42 had struck a referral deal with Carbonite (50% off selected plans), I’d personally been thinking about moving to Backblaze – a much better-looking, simple, well-reviewed product – for some time already. Within hours the Backblaze blog had posted an article detailing how to switch from CrashPlan, and the advantages over Carbonite, which immediately won me over. 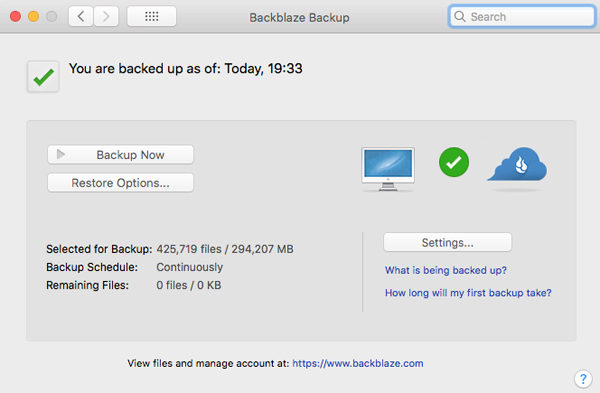 Setting up Backblaze is so simple, it’s barely worth mentioning. You sign up online for a free 15 day trial, download the app, and install it as per any normal Mac application. A subscription costs $5/month or $50/year (March 2018).

It runs in the menubar, and has a well-designed System Preferences panel that allows you to customise your backups if you so wish: excluding certain folders, files and file extensions; adding a private encryption key; scheduling backups; and, crucially, altering Backblaze’s performance.

This last point is very useful; as with any initial backup, your first upload is going to take some time (the exact amount of which is displayed in realtime in a webpage linked from the app), and you may wish to alter how much of your bandwidth and resources Backblaze uses during certain periods. 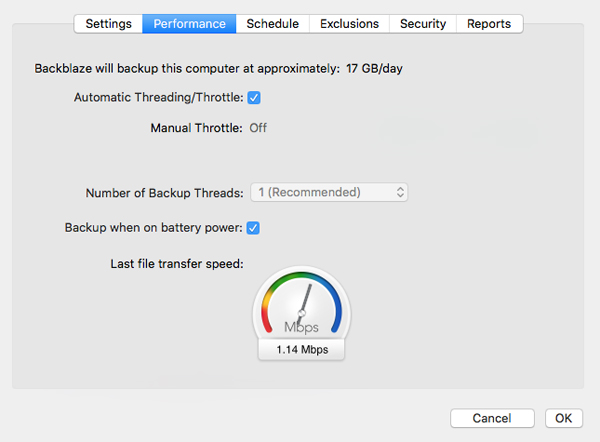 Depending on your connection speed, after a few days or so your first backup should be complete, and to be perfectly honest I haven’t noticed Backblaze since. Unlike CrashPlan, it’s never once affected my Mac’s speed or bandwidth, and seems perfectly unobtrusive. The only small downside is a lack of NAS drive support, but for a service that excels in all other areas, is something I can live with.

For more information about Backblaze, check out The Sweet Setup’s review for a much more in-depth view of the software, or head over to Backblaze’s website.