If you are still hanging on to 2011’s iPhone 4S, you will probably have come to the realisation that it might be finally time to upgrade now that it doesn’t support iOS 10. But if you don’t want to spend big on the newly-released iPhone 7, maybe the cheaper iPhone 6S is for you. 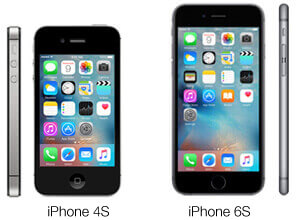 Not just that – it’s slimmer (7.1mm vs 9.4mm), more rounded and feels far nicer to hold. There’s also a much better screen-to-surround ratio, and with the retina display of the iPhone 6S, room for eight more apps on your home screen.

If the size increase is an issue, Apple also launched the iPhone SE last year, which is a similar size to the iPhone 4S, but slightly thinner and lighter in weight, and works with many of the newer iOS features.

Unless you are the most basic iPhone user, you will almost certainly have noticed the speed of the iPhone 4S crawl to a halt in the last couple of years, especially if you are running iOS 8 or iOS 9.

While the iPhone 4S has managed to survive four generations of operating system, users have had to result to many tips to speed up their devices in order to cope with the increased technology. For that reason Apple has announced that the new iOS 10 won’t be available to iPhone 4S users.

Moving to an iPhone 6S, you will notice a massive speed increase – iOS 10 runs incredibly smoothly, even with all the features turned on. You will be able to check all your social media in the time it takes the iPhone 4S to simply load the sluggish Facebook app.

Of course, all that extra demand on the iPhone 4S processor (A5 chip) also causes strain on the battery too, something which users know all too well. The average iPhone 4S battery won’t even make it to the end of the day, and can often jump from being reasonably full to being in the red zone very quickly without much use.

Thankfully the iPhone 6S battery lasts far longer, in part simply because the device’s newer A8 chip processor isn’t always running at its limit. You can expect to get through a day without worrying about the battery (unless you are heavily streaming or playing games), and more importantly can rely on the battery percentage to be accurate and not drain on you unexpectedly.

One of the more frustrating things about the iPhone 4S is that it will often quit apps that are running in the background, due to lack of RAM. Flicking between apps is painfully slow at best, but even worse when you return to your previous app to find that it’s restarted from scratch; especially annoying when playing games or streaming video.

Upgrading to the iPhone 6S will make this a thing of the past. It’s not uncommon to return to a game that you were playing days ago to find that you can pick up right where you left off. It’s perfect for multitasking, something that we are doing more and more with our phones.

Although the iPhone 4S has survived five years there’s been one major difference in Apple’s hardware over that time – the introduction of the Lightning port. The iPhone 4S was the last to be produced with the 30-pin dock connector, something which now seems incredibly cumbersome.

The iPhone 6S comes with the now standard Lightning charging cable, and unlike the new iPhone 7 also retains a 3.5mm headphone socket.

Smartphone cameras have leapt forwards in terms of quality in the last few years, and this too is reflected in the iPhone 6S. The quality of the images from the rear camera, including a jump from 8MP to 12MP, is vastly improved by clever technology within the lens and sensor that means your photos will be noticeably brighter, better focused and sharper than on the iPhone 4S.

The front facing (FaceTime) camera sees an even bigger boost. Selfies on the iPhone 4S were grainy at best with its 0.3MP camera, whereas the iPhone 6S boasts a 5MP lens with flash and HD recording.

Introduced in 2013, Touch ID has now become the industry standard way of opening your phone. One simple press of the home button on an iPhone 6S replaces the need to enter your passcode every time you want to unlock your iPhone 4S. NFC (Near-Field Communication) technology also allows you to take advantage of Apple Pay, which is now commonplace amongst most retailers.

On a similar note, transferring photos or other documents off your iPhone 4S to another device can be an incredibly cumbersome process. Technically the iPhone 4S is capable of Airdrop technology (which uses Bluetooth and/or Wi-Fi), but Apple never released it for the device. Luckily it is supported on the iPhone 6S, which means sending files to friends in your vicinity is as easy as the touch of a button.

Up until last year Apple’s base iPhone models came in 16GB and people complained; at the release of the iPhone 4S it was a mere 8GB. At the time this was still a reasonable amount, but with photos, apps, and indeed iOS itself, taking up more and more room, anyone with an 8GB or 16GB iPhone 4S will almost certainly have seen the “Storage Almost Full” message many times.

Finally Apple has relented this year and bumped up the base model of the iPhone 6S to 32GB, which while still not fantastic, does give far more room to play with on your device.

Let’s face it, having evaluated all that, you could still get a brand new iPhone 7 for £599, only £100 more than the iPhone 6S. But if money is an issue the iPhone 6S represents a very decent phone for a reasonable cost. It’s also worth bearing in mind, if you have kept your iPhone 4S in reasonable condition, you should be able to reclaim at least £50 by selling it on eBay.

If you are the type of person to try and get the most possible value out of a product – whether for environmental or monetary reasons – keeping an iPhone for five years will have been no mean feat. If you outright purchased an iPhone 4S back in 2011 for £500, it has cost you £100 per year (or £8.34 a month), which represents excellent value.

Unfortunately, though, with all technological products there comes a point when we have to let them go, and for the iPhone 4S that time has come. The new iPhone 7 is an excellent device, but for those with other motives – from keeping the headphone jack, to simply saving a few pennies – buying an iPhone 6S will be an equally safe purchase.