With the reboot of The Crystal Maze now in full swing after mixed reviews at the start, how is it fairing against the original version of the show? Here’s a rundown of the worst and best of the new series.

1. Ayoade is far too meta

Sure, it’s his usual style (see Gadget Man and Travel Man), but having the host constantly referring to ‘the show’, mentioning the editing and the game show format, shatters all the illusion of the original. Whereas Richard O’Brien mastered the art of breaking the fourth wall whilst maintaining the mystery elements of the show, Ayoade has clearly set his humour around outsider belittling of the actual format – including the lack of budget, unconvincing props and naff prizes – rather than acting as the custodian maze master of a fantasy world. It’s a real shame that little on TV can be done straight anymore, without a knowing nudge and wink to the viewer.

“Not on your life! What a terrible idea”, said original The Crystal Maze director and producer David G. Croft when Channel 4 asked about doing celebrity specials the first time around. “We worked very hard to keep an air of mystery around the series and to have integrity”, he later explained – which pretty much sums up the embarrassment that was the z-list 2017 specials. Bring back the Christmas kids episodes, they were amazing. Joey Essex and Louie Spence, very much not so.

Another thing that’s very different from 20 years ago is TV advertising, which now means a commercial ‘hour’ is down from 47 to 42 minutes. This means we now only get ten games per episode, as opposed to a minimum of 13 games previously. To counter this, the number of contestants is now reduced to five, resulting in a rather predictable two games each, and a whistle-stop tour of the maze, rather than an immersive experience in each zone.

4. The contestants all know each other

Despite the shorter running length, much unnecessary time is spent ‘getting to know the contestants’ at the beginning of the show – this revamp saw applications of connected teams, not individuals. Although the groups have been wide-ranging, there’s some unique magic missing from having six strangers from all walks of life forced together to battle the maze.

While The Bottle Yard studios in Bristol have legitimate spacial and design issues with water, the boat ride down the 60ft ‘river’ to enter through the Aztec zone was always a highlight, and it’s a real shame to see it replaced by some clearly plastic lightweight rocks. Similarly, the awesome moat and drawbridge that rose from within to protect the Crystal Dome are gone in favour of a light and laser extravaganza, which although far more modern, loses some of its centre of the labyrinth end-game mystery.

6. Buying back teammates is all wrong

While it’s great that lock-ins are still a huge part of the game, the process for exchanging trapped contestants for a crystal has been inexplicably altered, again breaking another classic part of The Crystal Maze. The original version was perfect – either buy straight out, or, in most cases, wait until later in the game and send another team member back through the maze to retrieve them. Now the lost contestant magically reappears from the wings, clearly fresh from the green room. Also, buying someone back after you’ve completed all games at the end and meeting them at the Crystal Dome? So, so wrong.

Which brings us to the last point, and the most confusing – the route through the maze is no longer linear, and zones are visited in a random order. Apart from making a mockery of the whole maze element of the game, especially the transition between zones, it’s a strange decision that seriously detracts from the very heart of the The Crystal Maze world, further making this remake a kitsch tribute rather than a continuation of a classic. 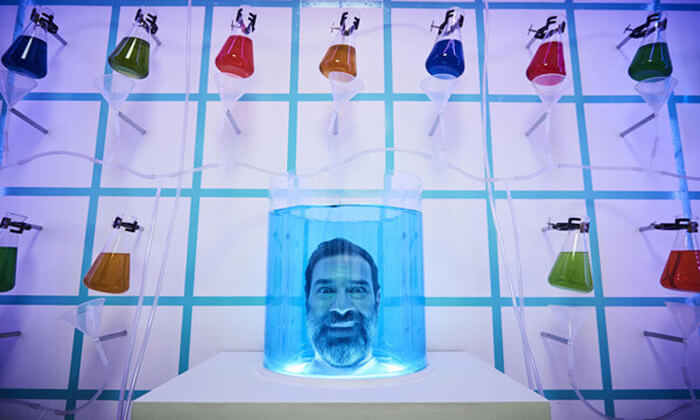 Aside from the grumblings above, Richard Ayoade is doing a great job. Sure, he needs time to settle in, but between the quirky wooden hand-stick and the “And thank you for watching. If indeed, you still are.” before storming away into the darkness ending, he’s making the role his own.

Although the sets have been brought up to date for high-definition cameras, the games remain the same Heath Robinson-esque brilliance as before. Particular favourites include the sliding chute stopper in Industrial zone and the laser maze in Future zone, while of course it’s great to see the slippery log and rafting back in the Aztec water pool. Designer Peter Gordon has done a fantastic job.

3. Industrial zone is back

It’s fair to say Ocean Zone was very much hit and miss for most people. While a brave attempt to combine a dirty engine room with saloon cruise ship elegance thousands of feet under the sea, it never felt quite right, despite having some brilliant water-based games. Industrial zone was always a classic part of the maze, and it’s great to see it return.

For the most part set designer James Dillon recreated his original plans as closely as possible from the original, but the old Futuristic zone – now renamed to the more sensible Future zone – needed a revamp. The result is a fantastic crisp white, modern spaceship, with unique spinning deck platform in the middle. It’s a shame that the windows looking out to space are gone, and the infamous talking computer now only used when entering the maze.

Although the maze might not be circular any more, at least the routes between zones have been kept from the original. While Future zone’s ‘teleport’ camera trickery might be bit naff, at least giant the Aztec wall remains, along with tunnels, staircases and a new ‘infinite void’ leading to the Medieval zone.

Taking away the choice of game (Skill, Mental, Physical, or Mystery) from the team captain makes a lot of sense, especially with less time to conquer the maze. It’s one of the few welcome format changes, not least as everyone knew that in the original run, the ‘choice’ was so obviously made by the producers anyway.

Mumsie might be gone (we’ll all just agree to pretend Maureen Lipman didn’t happen), but it’s great to see cameos from Jessica Hynes and Adam Buxton on the show. It’s a shame the latter’s game is a bit rubbish, especially the lack of time limit (which, along with a similar Medieval zone game, doesn’t make for great TV), but they bring a welcome bit of extra personality to the fantasy of The Crystal Maze, which will hopefully thrive for a while to come.