Two years ago I first shared my iPhone 4S Home Screen, shortly before upgrading to the iPhone 6s. With my usual biennial update due soon – whatever the new iPhones may be called – it’s time to look back at how my home screen has changed over the period. 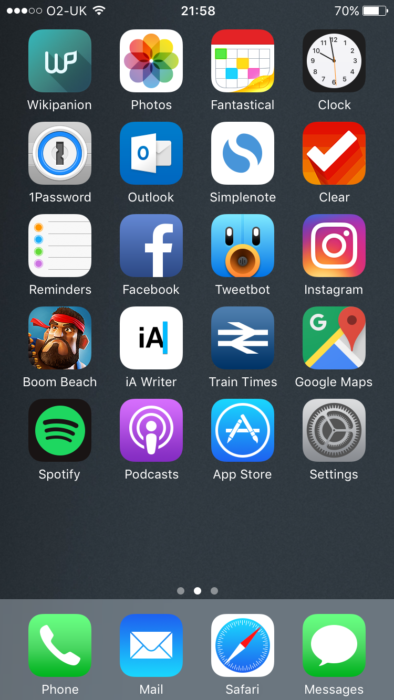 Not one for dramatic changes, my dock has remained steadfast. The four key built-in iOS apps Phone, Mail, Safari and Messages, still fill the fixed bottom row. Although WhatsApp now accounts for probably over half of my text-based chat, the simplicity of the native iMessage, coupled with my immediate family also being part of the Apple ecosystem, means Messages just about keeps its place in the tray. Similarly, two years on, despite the hype of third-party entrants Airmail and Dispatch, Mail still does its job well.

A Change in Thinking

That’s not to say there hasn’t been changes elsewhere. Notably, with the iPhone 6s came not only a new iOS 9 (followed by iOS 10), but also a change in size and screen resolution. Crucially, it allowed for two new rows of four apps per screen. Aesthetically though, the cluttered look never quite felt right to me, so I’ve kept one row free to give a bit of ‘white space’ to the design.

The other big change was the removal of any folders from the home screen, again part of a decluttering process. With the search function so quick and easy in iOS 10, I rarely swipe to reveal my second screen when a quick swipe down and a few key letters can take me straight to any app.

Over the last few years, the once loathed Microsoft has seen a change in favour, not least with what is easily the best third-party email app on iPhone. Built on former app Acompli, which Microsoft acquired back in 2014, Outlook looks, feels and acts exactly like a native Apple app, and is a joy to use for my secondary Hotmail email account (As previously noted, the built-in iOS Mail app can now handle Exchange and Hotmail accounts, but I choose to keep mine separate.)

One of several apps that used to sit in a Utilities folder, 1Password now has its own place on the home screen. Quite simply the perfect password manager, that everyone should be using. Generates, stores and protects complex passwords, hidden in your own vault which on iOS 10 can easily be accessed by Touch ID and the integrated Safari extension.

Instagram is easily my most-used social media app these days, overtaking Facebook which is increasingly being kept solely for events and staying in touch with less immediate family members. The ability to switch between multiple accounts is also a recent game changer.

Although most of my writing takes place on its Mac counterpart, iA Writer has become my writing tool of choice (despite its somewhat controversial recent update). The iOS app still needs some work however, and feels clumsy compared to the previous version’s simplicity.

Moving from being a car to a train commuter, knowing platform numbers and delays is a daily part of my life these days. UK Train Times is an app I bought into a long time ago, back when it was made by Dave Addey. It’s still the most aesthetically pleasing, but stripped back iOS UK rail app available; National Rail is excellent, but ugly, whereas Trainline is beautiful, but cluttered. This hits the sweet spot in-between.

Although my Games folder is relegated and rarely visited, Boom Beach is my one daily fix. Made by the same team as Clash of Clans, it’s an online real-time strategy game, albeit with a hugely playable single-player element. It’s heavily designed in the freemium model of delayed upgrades and health refills, but perfectly allows me to casually dip in daily without spending any cash.

Quite how Google Maps wasn’t on my home screen last time around is a mystery even to me. Still superior to the native Apple Maps – although the gap is closing – it remains one of the great regrets of iOS that Apple and Google parted ways over maps in 2012, and frustrating as the only thing missing is Siri integration.

While Apple Music launched to reasonable success, I was already a long-term Spotify user, as are the majority of my friends. As with most people, over the last two years my music purchasing has virtually died out in favour of streaming, meaning the native Music app is all but redundant for me. Again, a near perfect app aside from a lack of Siri integration.

Although many users favour auto-updates for their apps, I prefer the manual approach to avoid bugs and unwanted features, which is the sole reason for the App Store’s place on the home screen.

With so many variables in iOS nowadays, having quick access to the settings is a real time saver. Most commonly used for turning on/off mobile data and location access for individual apps, as well as the excellent new storage analysis.

Sadly now defunct third-party Hotmail app, but replaced by the excellent Outlook (as above).

While easily the best language learning app out there, it simply wasn’t being used enough to warrant valuable real estate on the home screen. I’d previously been learning Spanish once a day, but, having given this up, it was time for Duolingo to take a back seat too.

For similar reasons to the removal of folders from the home screen, searching for contacts is so easy by swiping down, using Siri, or through the Phone app, that there’s no need to use this app to access them.

Although still regularly used on my iPhone, you can see the end coming for Snapchat, especially with Instagram’s new Stories feature gaining ground by the day. Hard to believe the company was once worth $29bn.

I’d been aware of Reddit for nearly a decade, but only signed-up and started participating within the last 18 months. Although I still use RSS, Reddit is fast becoming my go-to place for news stories and opinion on a range of personalised topics. The only app not on my home screen that I use at least once a day.

Pretty much the only other game I still regularly play on my iPhone, Candy Crush is opened most days to collect the daily bonus and spin the daily booster wheel. It’s slightly addictive, but never so much as to make me ever consider spending any money.