Has your Xbox One S thrown up an error code or is failing to get past the Xbox One green loading screen? Fear not, it’s usually fixable without losing any of your games or saved data.

Luckily there’s a series of steps to try to fix an E200 error message issue on Xbox One or X Box One S:

Many people don’t know there’s an easy way to hard reset your Xbox One. Simply hold down the power button on the front of your Xbox for 10 seconds. You can then press to turn back on.

This fixes many issues, especially game crashes. You can also try the same but with also unplugging the power cable for at least 10 seconds before turning back on.

While this option is quite fiddly, it manually updates your Xbox One without the need to connect to Xbox Live or the Internet. The full walkthrough is here, but essentially it’s a three step process: 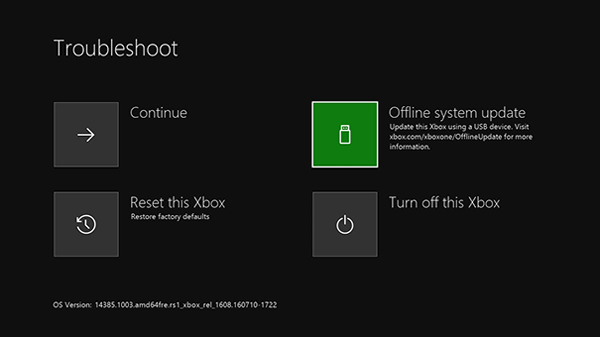 Occasionally the manual update process won’t fix every Xbox One issue, which means it’s time for the heavy duty approach. From the same Troubleshoot menu as above choose the ‘Reset the Xbox’ option.

Here’s the important bit: choose ‘Reset and keep my games and apps’. This will keep all your saved games, downloaded games and many other options. (If you choose the other option you will lose EVERYTHING on your Xbox). On restarting you will need to log in to your Microsoft account again and reinstate any personalisation options such as backgrounds and colours.

4. Send to a professional

Very rarely, none of the above will work. At the end of the day, your Xbox One is just a computer – albeit one built for gaming. Its components, namely the hard drive can be repaired or swapped with the right expertise. Firstly check with Microsoft to see if your Xbox One is still under warranty. If not, there’s many companies out there that offer a repair service at a cost, including Microsoft themselves.