In the wake of having my Tweet featured on MacRumors last week, I thought it would be good to fully document the changes in Apple’s Podcasts app in iOS 14.5 – especially given that several of the article’s comments seemed to misconstrue the issues many users are facing.

For some background, Apple’s Podcasts app has never been great. Broken out from iTunes into its own app in iOS 6 in 2012, Podcasts launched with the now infamous reel-to-reel skeuomorphic look.

As iOS 7 (2013) then quickly ditched that whole aesthetic, Podcasts changed to a much more minimalist-looking app – featuring one main ‘My Podcasts’ screen, with the functionality to download, stream, or delete episodes from any given show. Crucially, this behaviour has remained the same ever since. Until now.

Visually, that’s the way things stayed until iOS 11 (2017), when the app was last overhauled, to add a ‘Listen Now’ front page designed to give quicker access to your most recent podcasts. The old customisable view was buried under ‘Shows’, and was, with hindsight, a warning of Apple’s approach to come.

The trend towards podcast discovery over podcast management has been further enhanced in the most recent release of iOS 14.5. Not only have the visual layout and menu options once again been altered, but, crucially, Apple has taken the decision to alter the basic underlying functionality of how a user can manage podcasts, changing the aforementioned behaviour that has stood since 2013.

Coupled with a bug that had seen many users experience syncing issues with older podcasts, those of us who have been using the medium of podcasts in Apple’s stock app for long before they were fashionable now have hundreds of mislabelled – or worse, automatically downloaded – old episodes, plus the hassle of losing customisation in managing shows.

To see these UX amendments in more detail, let’s look the changes to each individual tab within the Library section:

Before we look at the big change to the hierarchy changes of the Library tab, there’s one smaller feature of interest on the overall page. Underneath the menu options, ‘Recently Updated’ (a relatively useful categorisation) has been replaced by ‘Recently Followed’ (a seemingly useless one). Quite why you would need to quickly access shows in the order in which you last followed them is unknown, but is certainly endemic of Apple’s new-found thinking. 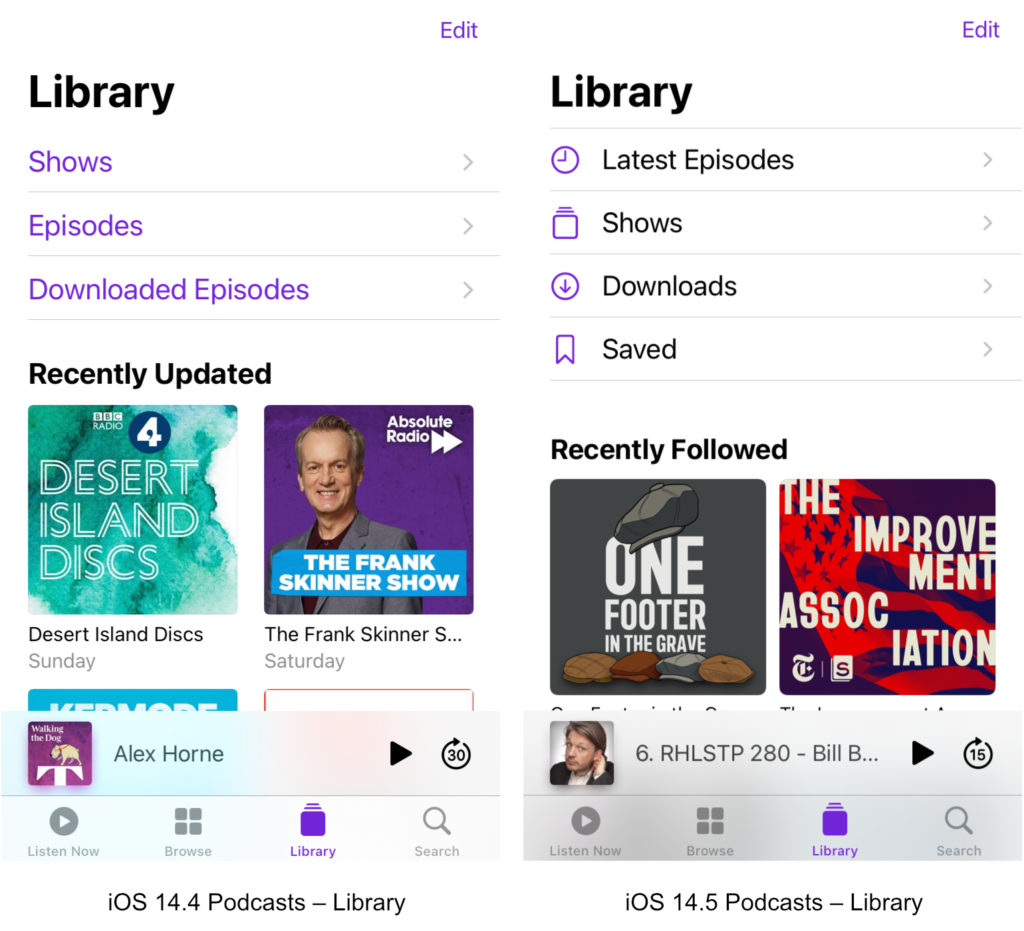 While this brings some clarity to the UI, it widens and divides your menu options, and massively complicates the functionality of managing podcasts, as we will see if we drill into each section.

Luckily, only the name has changed here – this remains exactly the same as the old ‘Episodes’ tab, showing a list of the latest available episodes for all of your shows, in reverse chronological order.

As touted by Tim Cook in the recent Apple Event, the Shows tab for individual podcasts has been completely redesigned, notably giving much more retail space to your latest episode and the podcast’s artwork.

They’ve also made a subtle, but frustrating change to the overall screen, now unfathomably listing when the podcast was last updated, rather than the old description of how many episodes you had left to listen to. 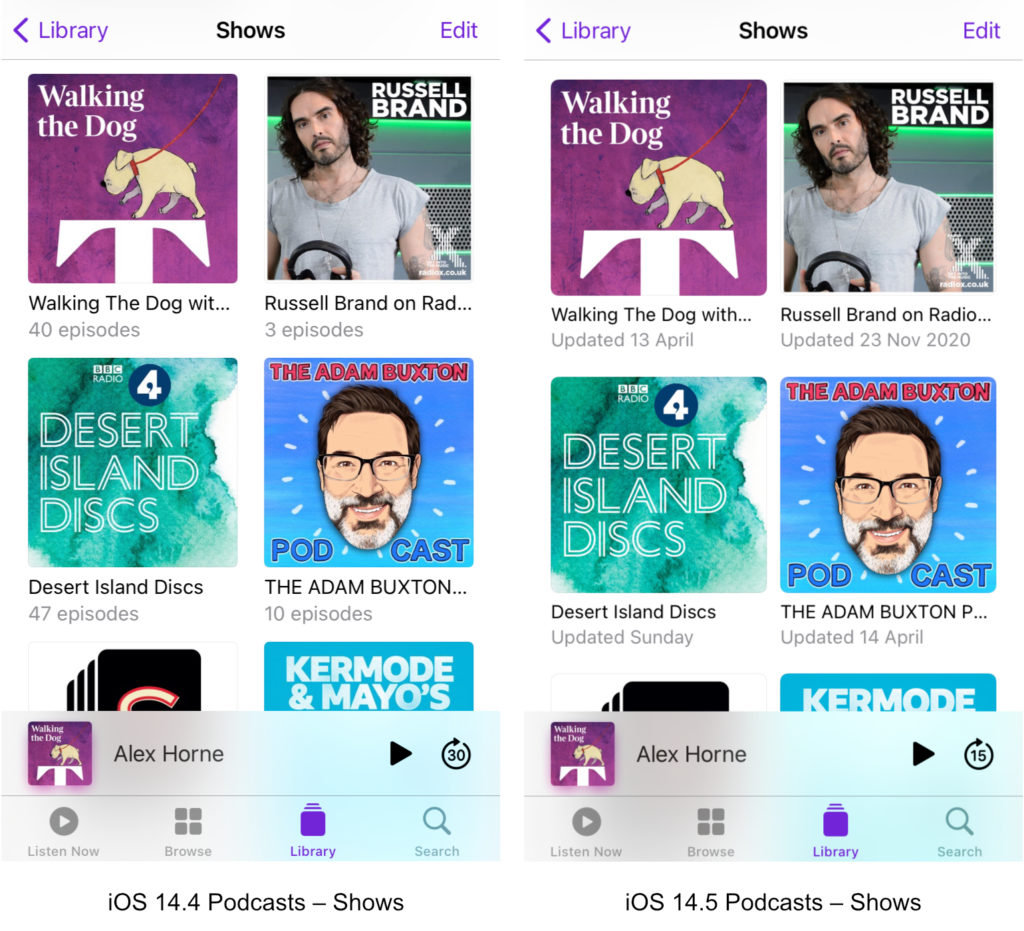 Crucially though, here’s where Apple have broken their own logic for the way podcasts are handled. Previously, you were presented with a list of every podcast available for a show (ordered either ‘newest to oldest’ or vice versa – a choice you could make in Settings). From this list you had two options to remove a podcast: you could either listen to it fully, or, if you chose not to listen to that episode, swipe to ‘delete’ it.

iOS 14.5 has changed that behaviour in two ways:

For several long-running podcasts, which you may have not listened to fully – either you subscribed many episodes after they started, or you skip over certain episodes – Apple Podcasts in iOS 14.5 now shows you EVERY SINGLE EPISODE which you haven’t fully ‘played’. It has no other way of knowing that you don’t want them.

Take the example from my Podcasts app below:

The Frank Skinner Show has been around since 2009. It has 755 episodes. I have listened fairly consistently since 2013 throughout that time, but have also skipped some episodes, notably ‘Best ofs’ that I don’t want to hear again.

In iOS 14.4: Apple’s Podcasts app was up to date, bar one downloaded episode.

To be clear, the majority of these are due to the API syncing bug, but a large proportion are more recent ones that I’ve deleted, but now say ‘unplayed’.

Unfortunately, nothing in Settings allows you to fix this.

Many commentors have suggested a solution: order episodes by date, ‘Newest to Oldest’, and use the setting for ‘Hide Played Episodes’ (which, incidentally, is inexplicably turned off by default).

But here’s the rub – I, and many other people, want to listen chronologically. The vast majority of shows are naturally episodic, meaning they need to be ordered ‘Oldest to Newest’. The problem being, in the show above for example, this then displays every single episode I haven’t ‘played’ from 2009. All 335 of them.

Put simply, the only option is to go back through all the unplayed episodes and tediously ‘Mark as Played’.

It should be noted, and thanks to @NordiiTW on Twitter, that this can be done quicker by reducing your font size and using the swipe function, rather than clicking on each one.

For anyone that fastidiously downloads every episode of a show, there is now the option of using the ‘Downloads’ tab – but that is at a massive loss of UX, notably not being able to order those shows by anything other than the default of alphabetical.

It does at least bring back the ‘Unplayed’ count as the description, as well as now allowing you to ‘Group By Show’ – albeit only on iOS (that option is notably missing on Mac).

That said, while the changes detailed above in the Shows section are annoying, there’s actually an even worse scenario that Apple have created: For many users who don’t have ‘Automatic Downloads’ turned on in iOS 14.4 or previous, but had deleted the episodes they don’t want, it’s now impossible to find their previously unplayed episodes in amongst the huge list of every one from a show.

The Downloads tab is only useful if you had downloaded every episode you wanted to keep.

In short, with the new iOS 14.5 divided functionality of Shows and Downloads, there is no way of finding these shows that you previously had access to in an easy list view.

This situation is where Apple would say that the new ‘Saved’ tab comes into its own. It’s certainly a useful feature, especially for those with limited storage, or just for those memorable episodes you want to keep for longer after listening to them.

Unfortunately, this is of course only applicable to anything marked to save from iOS 14.5 onwards, and not applied retrospectively. It therefore doesn’t help solve any of the above issues.

How you previously used the functionality of the old Shows tab, will determine how far you want to go in resolving the issues. It certainly seems that Apple have put a stake in the ground and won’t be changing back any time soon, especially given their push into paid channels. The much publicised social media style change of phrasing from ‘Subscribe’ to ‘Follow’ signals as much, as does the emphasis on promoting ‘latest’ and ‘new’ widely throughout the app now.

Much in the same way as music has become so disposable, so it seems that Apple are thinking Podcasts are heading the same way – possibly not least due to the sheer abundance of them in the last couple of years.

In terms of UX behaviour, for whatever reason, Apple have decided to break apart the previous functionality across these two redesigned Shows and Downloads tabs, giving a lacklustre and frustrating usability in both. Their emphasis has clearly been put on discovery of new podcasts rather than management of older ones, at a huge loss to the user experience.

At best, you could hold on for a fix to the API syncing issue, which must surely come soon. Beyond that, you will be looking at manually marking old ‘deleted’ episodes as ‘played’, as detailed above. Either way, you may still need to change the way you use the app, especially if you don’t intend on downloading every required episode and switching your main focus to the Downloads tab.

If you do decided that this might be the time to cut your losses, there are, of course, alternative podcast apps out there, notably Pocket Casts – which works across all devices – and Marco Arment’s longstanding iOS Overcast app.

While both are excellent, personally I can’t help but feel they should be unnecessary. The duty of Apple’s stock apps should be the same as their longstanding ecosystem mantra – “it just works”.

The iOS podcast app just needs to be a well designed, aesthetically pleasing, simple-functioning podcast player and management app, and nothing more. Forcing a new marketing positioning into the app has had a detrimental effect on the usability, especially, sadly, for long-term podcast users.